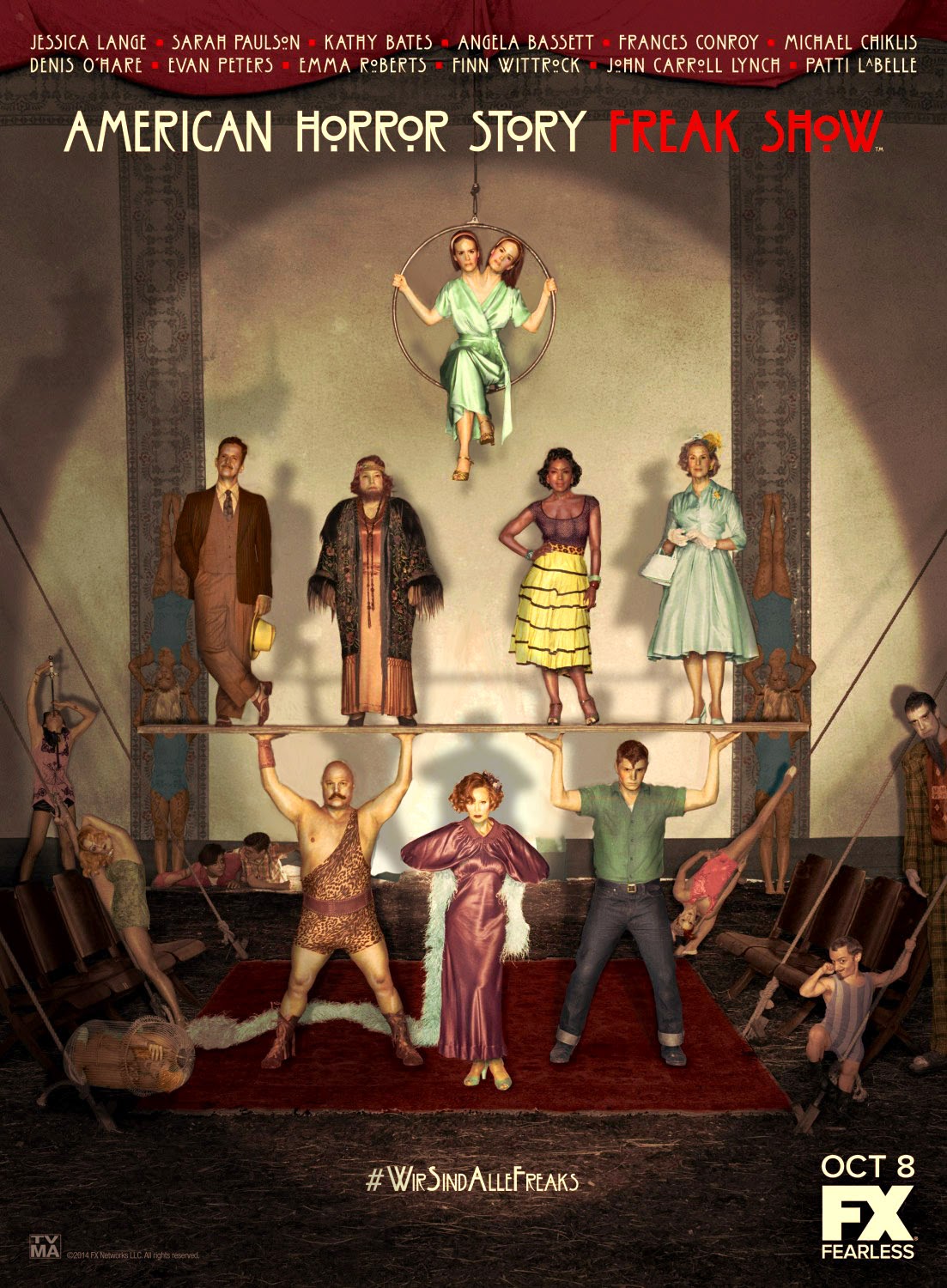 As soon as I heard what the theme was going to be for this season of American Horror Story, I was really looking forward to it. I'm a big fan of the old 1931 movie "Freaks", and from the promos, it looked like AHS was paying homage to it in several ways. I've always been drawn to carnivals and "freak shows". They've always fascinated me, and in today's politically correct world, even moreso. So, I went into the season premiere of American Horror Story with high expectations.

Let me start with some of the things I liked about the first episode (note, there will be spoilers ahead!). First off, I love the killer clown subplot. I actually didn't know about that ahead of time, took me by complete surprise, and it was really effectively creepy. I found myself looking forward to his scenes the most. I'm actually someone who isn't afraid of clowns in general, but this guy would give anyone nightmares. The make-up effects are really good, and his mouth put me in my mind of "The Man Who Laughs", an old silent film about a man with a permanent smile. I'm really looking forward to finding out more about the character, who apparently is called Twisty.

Jessica Lange is great as always, and I really liked seeing glimpses of her backstory. Seems like a very tragic character and so far (though it's a bit early to tell) seems to be a lot more sympathetic and humanized compared to the characters she played in previous seasons.

Finally, I'm intrigued by Frances Conroy's character and her son, who both strike me as creepy in their own way. I was getting a bit of a Norman Bates (Psycho) feeling from them. They're relationship seems a bit...odd, beyond just a spoiled man-child and his doting mother. Curious to see where this goes.

Now, the things I didn't like, and probably from above you'll see a glaring omission from the things I liked, and that would be the "freaks" themselves, which is hugely disappointing for me. Let's start with the double-headed Siamese twins, played by Sarah Paulson. Unfortunately, I find both personalities forced and obnoxious. I get that they're supposed to be opposites and could be a source of tension later on, but at the moment, I feel like they're just kind of blah. The CGI effect is pretty distracting too. I found myself caring little about their dialogue and paying more attention to the effect, which...and I'm sure I'll get lots of disagreements here...looks fake to me, especially where the heads attach to the body. Also, one scene in particular (one of the ones in the hospital), when one of the twins was talking (I believe it was Bette), the other one looked flat and dead, almost like they used a still image instead of video. I usually like Sarah Paulson's characters in AHS, but neither of these are working for me yet. Plus, the fact that they killed their mother leaves little room for sympathy.

And this is actually my major gripe so far. Most of the "freaks" are unsympathetic. There's really no one to root for. AHS is known for its morally corrupt characters, but there's usually at least one or two that are worth rooting for. One scene in particular made me dislike all of them in one fell swoop, and that was the film strip scene. I'm not going to go into extensive details, but it was too much for a premiere where you're just getting introduced to the characters. And there was really no reason for it, except to show them as depraved people as a whole. That's not really how I was expecting the "freaks" to be portrayed. I expected there to be some moral ambiguity, as that seems to be common in the series, but there was no ambiguity here. It was just flat out wrong and disgusting, and made me kind of angry. It painted "freaks" in such a bad light right from the get-go and dehumanized them, which is something society did back then, typically unjustifiably. The show is depicting them as monsters, which is really not what I was expecting. I realize it's only the first episode, but that scene is so unforgivable, I'm hoping some of the yet-to-be-seen characters will give me someone to like and root for.

I know I might be being a bit harsh, it's so difficult to hold back when I'm this disappointed. I love the series, I love that it brought true horror to television, but the season premiere just left a sour taste in my mouth. I'm not sure what it says about the show (or me) that the most enjoyable character is a murderous clown.

But it's still early, and I'm not going to give up on it that easily. Hoping for the best with next week's episode.