Castlevania 2: Simon's Quest - Why All The Hate?

One of the first video games I ever played was Castlevania on the NES. I loved it for its dark themes and unique gameplay. Though, it's a really hard game and when I was kid, I could never make it past the first boss. But still, I remember replaying that early stage many times just because it was so much fun.

Over the years, I've heard so much about Castlevania 2 being an awful game that I never bought it. I only ever owned Castlevania and Castlevania 3. I decided to finally play it for myself and draw my own conclusions. 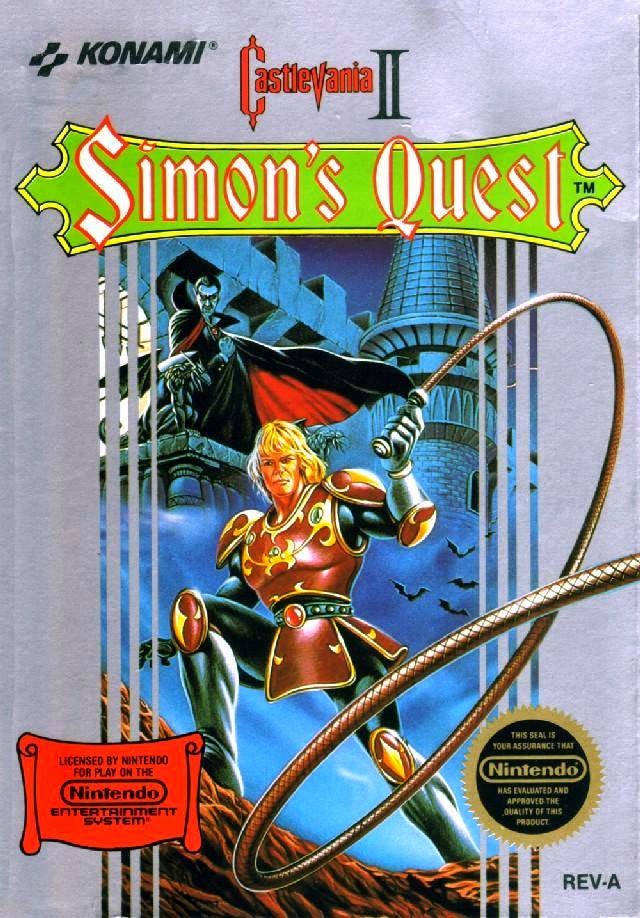 It definitely has a different gameplay style from the other two games in the NES library. You start in a friendly village, where you have to purchase items and talk to people for clues. It reminded me a lot of Zelda 2: The Adventures of Link, which is actually one of my all time favorite games. So, I didn't mind the format too much. After leaving town, you go through woods and cemeteries and marshes, etc fighting enemies and looking for mansions that house parts of Dracula, which you must collect to piece Dracula back together to kill again. I'm a little foggy as to why this is the case, but the plot isn't that important IMO.

In many ways the game feels similar to the first one, where you play as Simon Belmont, you wield a whip which has multiple upgrades, and you collect hearts as you kill enemies. The hearts in this game is a form of currency you use to buy items in the villages you come across in your journey. What I really liked is once you have an item, it doesn't hearts to use it, with the exception of the diamond, which I never ended up using anyway. You have unlimited holy water once you acquire it for a mere 50 hearts, which acts as both a weapon and a way to find hidden items and false blocks.

A new element to this game is the day to night transitions. Now, I've heard a lot of people gripe about this feature, and to be honest, I kind of liked it. Yeah it would've been nice if you could skip the text, and it was especially annoying when the box would pop up when making difficult jumps, but overall it didn't bother me. For me, it gave the game a more dynamic feeling and it was really unique for its time, so the flawed design of it is kind of understandable.

Another complaint I see often is about the cryptic puzzles, which I completely agree with. If I had played this as a kid, I would've been so lost, so fast, I don't think I would've played it again. However, are they anymore frustrating than the cheap deaths found in the other Castlevania games? Eh, not really. I actually prefer trying to solve cryptic puzzles than trying to make impossible jumps while enemies are flying at you. This is of course a personal preference. The jumps in Castlevania 2, while occasionally difficult, are pretty minor. I can only think of one screen where I had to use multiple continues on a series of difficult jumps, so for my money, I was happy about that. That is unfortunately one of my major gripes with the series in general is that sometimes the deaths feel a bit unfair.

Compared to the other games, Castlevania 2 is actually really easy. Going into it, I didn't realize it had multiple endings depending on how long it takes to complete the game, so I took a really lackadaisical approach and got the worst ending. Um...oops! But once you're familiar with the game and the map, replaying for a good ending probably wouldn't be much more difficult. I have heard you have to limit your continues, which I imagine would up the challenge, mostly on the jumping parts. The enemies aren't that hard, and the bosses, including Dracula, are laughably easy. In this sense, it did feel like a bit of a letdown when I finally got to Dracula. I took my time, got all the items in the game, was looking forward to the final battle, and it left me with a very "meh" feeling. It sort of felt like the developers ran out of time to make a proper final stage and boss battle. So, that was pretty disappointing.

Maybe it's because Zelda 2 is one of my favorite games, despite the fact that a lot of people seem to hate that game too, I really enjoyed Castlevania 2 overall. I can see how diehard fans of the original would be disappointed by it, especially at the time if you were anticipating its release. It does take the series in a different direction, but that was really common in NES series. Zelda 2 was very different from Zelda 1 and Mario Bros 2 (the North America release) was wildly different from the first as well. These were three of the biggest series at the time, and I can see why the developers wanted to branch out a bit and try different things from the original.

So I don't really think Castlevania 2 deserves the hate it's gotten over the years. You don't have to love it, but I think it's worth appreciating it for what it was trying to be, and it's clear to me they were trying to make it an RPG, and maybe that wasn't the right decision for what was primarily an action/adventure series. But for what it is, it's not a bad game by any means and it has a lot of redeeming qualities.