Why I Love The Monster Squad 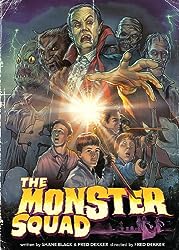 Let me take you back to a simpler time known as the 1980's. Horror movies were rife with supernatural serial killers who kept the body counts high and the sequels a-coming. Along comes a little PG-13 movie, starring a cast of kids and classic horror monsters. The movie struggled to find an audience because it seemed to have too many adult themes and language for young children, the PG-13 to turn off the teenagers going to see the R-rated films, and adults who saw it as a kid's movie. Well, luckily I had a dad who loved those classic monsters and a mom who was lenient with PG-13 movies, so I got to see The Monster Squad at the tender age of five.

Honestly, as far as horror movies went, I always found it to be pretty tame. There was plenty of light humor, not a lot of gore to speak of, and honestly, I just found the movie really cool. It benefits from having a gentle giant character in Frankenstein, who befriends the children, which as a child myself, put my mind at ease that the kids would triumph in the end. Obviously, as an adult, you tend to know that a PG-13 movie starring a group of kids, isn't going to kill off said kids, but when you're a child yourself, all bets are off. I mean, hell, Dracula DOES blow up their treehouse in the hopes that they're inside, so it's not like it was out of the realm of possibility. But I'm getting ahead of myself here.

I think the reason this movie works so well for me is because of the commitment and sincerity of the adult actors, namely Duncan Regehr and Tom Noonan as Dracula and the Frankenstein monster. You could pluck these characters out of this so-called "kid's movie" and put them in any horror movie and they'd feel just as genuine. Regehr, despite being the antagonist to a bunch of kids, is pretty damn merciless and scary. He never becomes the bumbling fool, as so many villains do in kid's movies, and he never plays Dracula in a campy "I vant to suck your blood, blah!" sort of way. When a character has been around as long as Dracula has and has become almost a caricature of himself, it's very difficult to breathe new life into him. But Regehr pulls it off perfectly. He definitely looks like Dracula in the traditional sense, but he plays him in a new and refreshing way. No stereotypical accent, no seductive scenes...hell, he's never even seen sucking anyone's blood. And yet you would still know it's Dracula at first glance, and his performance is convincing throughout the movie.

Tom Noonan plays the Frankenstein monster a bit more traditionally, but with a great amount of empathy. You can feel his struggle between being loyal to the kids (especially Phoebe, who initially befriended him) and his "master", Dracula. This is another character who has become a caricature of himself and is very tough to pull off as a real, three-dimensional character again, but Noonan does it beautifully. When I was a kid, I always wished I had my own Frankenstein monster to protect me, as Phoebe did, but it's funny, as I've gotten older I actually find myself relating to him as a character. Who hasn't felt like an outcast or struggled with making the right choices? And the latter comes to a head at the end of the movie in one of the most heart-wrenching scenes I've ever seen put to film. And it doesn't feel like a shoehorned emotional scene for the sake of "getting" the audience. You completely understand why it had to play out the way that it did, even if you didn't want it to. I'm being vague so as not to spoil it, but if you've seen the movie, I'm sure you know what I mean.

I have to give props to Jon Gries as well, who plays the Wolf Man in human form. He's never even given a name (simply billed as "The Desperate Man" in the credits), but he also plays the part of a tortured soul amazingly well. He has few lines compared to Dracula and Frankenstein, but every one of his scenes stands out to me and are very memorable. His scene in the police station where he shouts, "Lock me up!" as the full moon is rising is so intense, it gives me chills. But my absolute favorite scene of his when he calls Sean and Phoebe's dad from a phone booth to warn him about Dracula, while also in the midst of transforming into his werewolf form. His half-man, half-wolf state and him growling, "He's gonna kill your son" haunted me for years...in a good way. That scene always really stuck with me, and is still my favorite werewolf transformation put to film.

Although the movie could be called a horror comedy, what I love about it is that the monsters are never really played for laughs. The kids are the comic relief but aren't hamming it up. They behave like real kids do and crack smart-alleck remarks. I also like that they aren't anti-adult. I know that sounds weird, but so many films featuring kids have this underlying "grown-ups just don't understand" tone, and that's not the case here. They go to the Scary German Guy (a lonely old man and a Holocaust survivor) for help, who is never presented as a skeptic when it comes to monsters. And Sean and Phoebe's dad, a cop, also becomes heavily involved in the monster hunt, even though he is skeptical at first. I like that everyone is useful and adds something to the movie. And I have to give credit to Stan Shaw, who plays the partner of Del, Sean's dad. His scene in the museum when they're investigating the missing mummy is, imo, the funniest moment in the movie.

Stan Winston did the special effects for the monsters in the movie, and it shows. He was an artistic genius. He had to come up with new but recognizable designs for the monsters, since the original designs are the trademark of Universal. I'll probably get some jaw drops for this, but I think his monster designs surpass the Universal ones. They just felt so real to me, and he made them look scary again, especially The Wolf Man. As much as I love the old Wolf Man movie starring Lon Chaney Jr, the makeup just never was a favorite of mine. It still looked too human to me. The Monster Squad Wolf Man actually looked threatening (those eyes, so creepy!). The Gill Man's design was stellar as well. You gotta love the practical effects of the 80's!

Monster Squad is timeless, much like the old Universal monster movies are. I think if I had never seen it as a kid, I would still love it if I saw it for the first time today. There's just so much to like about it. The special effects, the dialogue, the pacing. It doesn't talk down to kids and it doesn't get too cheesy for adults. It has the perfect mix of horror, comedy, action, drama, and mystery. That doesn't mean it's not without its flaws (why does the term "virgin" only apply to girls, for example?), but they don't detract from all the great scenes and moments the film has to offer. There seems to be a real sincere fondness and respect for the classic monsters from the filmmakers, and that is so rare to see. With so many remakes out there made for a quick buck, this little cult classic film shows how you can take an old idea and give it new life.

And that is why I love The Monster Squad.

(By the by, why WOULDN'T a wolf man have nards, anyway? Men have nards, wolves have nards...seems like a no brainer to me! Still trying to figure out the logic behind that.)
Posted by Laura at 5:59 AM

Email ThisBlogThis!Share to TwitterShare to FacebookShare to Pinterest
Labels: 80s/90s